We have been wanting to learn more Spanish for a while now. We work with some Spanish-speaking folks, we grow native American crops that are still traditional foods in many areas that are now dominated by Spanish language, and our 2012 trip to Cuba would have been even more educational if we had a better command of the language. And let’s face it, if there’s one non-English language that is useful in the US, it’s Spanish…our years of French, Latin, and Greek are great, but we don’t find ourselves using them very often here in the Heartland.

After several years of watching and testing out the recipes from Chicago Chef Rick Bayless’s PBS show Mexico: One Plate at a Time, John & Peg finally decided to try to find a language school and some good food as a way to skip the winter doldrums.

After quite a bit of research, they settled on Oaxaca (pronounced wa-HA-ka), the capital city of the Mexican state with the same name. The state of Oaxaca is near the southern tip of Mexico, and its capital is in an inland valley at about 5,000 feet above sea level. 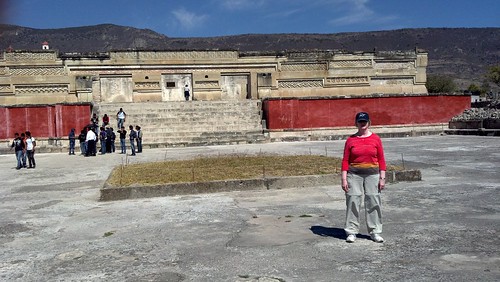 The area in and around the city of Oaxaca offers a fascinating view of both pre- and post-colonial civilizations.

It had all the things they were looking for: a highly recommended language school, delicious local cuisine, and a State Department “ok.” They got the recommended vaccinations, signed up for classes, and reserved a room in a B&B in the heart of the city. They arrived in January with only a few basic words of Spanish, eager to learn.

The valley was checkered with small and medium-sized fields growing both traditional and modern crops.

Everything turned out to be even better than they’d hoped. The B&B was a beautiful, environmentally responsible place filled with interesting visitors from around the globe who returned year after year. It was easy to get around, the food was amazing, and the Oaxacan people were patient and friendly.

They threw themselves whole-heartedly into their studies at Amigos del Sol, the language school. Class began at 9am every weekday, consisting of lessons on verb conjugation, sentence structure, and vocabulary. Peg stayed for 3 hours, and John stayed on for an extra hour and then had a separate conversation session in the evening with their teacher. The one-on-one conversation allowed him to learn about agriculture – both the Spanish vocabulary words and how it is practiced in Oaxaca.

Traditional uses of our crops

Since we grow corn and dry beans, both native New World crops that were first domesticated not far from Oaxaca many thousands of years ago, they had a special interest in learning about the modern and historical uses of these foods.

In addition to making an effort to eat traditional local cuisine (the one night they ventured into an Italian restaurant was the only time they had a sub-par meal), they were also able to attend a tortilla-making demonstration (left). Later on in the trip, Peg took a cooking class with a renowned local chef. While they didn’t make the mole sauce which is a local delicacy (it has 28 ingredients and takes more than 24 hours to complete), she came away with many tips, tricks, and flavors.

One of their weekend visits to historical sites took them past a rock with several strange holes carved out of it.

Their tour guide explained that this rock was used to grind corn in the traditional manner before modern stone milling. These basins were hollowed out by thousands of women’s hands, grinding corn kernels into flour for tortillas.

One of John’s missions for the trip was to find varieties of heirloom beans and peppers for which he couldn’t get seed in the US. He had applied for a special permit from the USDA to import the seeds in case he found some, and there were strict restrictions on how many and what kinds he could bring, and how they had to be treated. Once in Oaxaca, they spent much of their free time between classes and on weekends going to the open air markets where farmers sold their produce, talking with vendors as best they could about the varieties. John recognized a small white bean as one that he sometimes finds mixed with our black bean seed. Upon inquiring from the vendor where it was grown, he was surprised to hear “Michigan!”

With tips from their language teacher, they did find several varieties of hard-to-find purple bean seed and some delicious spicy peppers.

John sorts seeds from the farmers’ market for import. The bean seeds (left) had to be checked individually for insects, and the dried hot pepper seeds (right) are so spicy he wore a mask and gloves to protect himself.

After spending hours painstakingly separating and cataloging the seeds he’d selected to bring home, John was appalled when his luggage went through the x-ray scanner with everything else. Fortunately, germination tests back at home have shown that the seeds are still viable. Whew!

A favorite pepper that Celso had tried to bring to his aunt in Los Angeles on a previous visit but had been rejected due to lack of paperwork. John hopes to be able to get her the seeds for this year’s garden.

This is just a tiny snapshot of the places my parents went and the things they learned this winter in Oaxaca. I haven’t even touched on the visits to the traditional mezcal factory (also spelled mescal, this traditional liquor is made from agave, right) and the rug weaving villages (many brilliant traditional dyes originate in this area). Or the artisanal salsas, the religious celebrations, the old (500 years ago) and ancient (5,000 years ago) structures that they visited.

I can’t capture the excitement in my dad’s voice when he called the first week to tell me that he’d gone to the pharmacy and had been able to describe the problem he was having, and get a prescription, all in Spanish! But I can say that before they were halfway done with their trip, they were already planning dates for next year and trying to convince me to come down for a bit. Now, two months later, they’re still studying Spanish every day with Duolingo, a free online language learning game.

Did I mention that my dad celebrated his 70th birthday while they were there, traveling unguided in a foreign culture with next to no basis in the language? Pretty awesome.

This entry was posted in Uncategorized. Bookmark the permalink.